Many of you will not have met Doddie Weir, but I was lucky enough to play rugby with and against him for over 15-20 years

He is one of the nicest guys you would ever be likely to meet and as you will all know he has been dealt a terrible hand!

Below is an extract from his website to raise awareness for the horrific disease that he has contracted.

Just when you thought January was going to be spent lounging on the sofa, foraging for leftover chocolate coins and counting down the days until the 6 Nations… Doddie Aid is back.

Doddie Aid is a mass participation event, encouraging you to get active in January and raise funds to help find a cure to Motor Neuron Disease. It was founded by former Scotland captain and British and Irish Lion, Rob Wainwright and raised a staggering £1M in January 2021, with 22,000 people taking part.

A few of us took part covering a few miles trying to help raise funds for awareness and a cure for this disease.

We had a great day yesterday, and Walter Graham joined myself, Peter Laverne and Jim Taylor

Therefore, we covered 24 miles, plus Jim did 5K on his hand bike, whilst awaiting us completing the 18 holes.

In 1st Place was Peter, then Walter them Fergus then Jim

We played for a small prize but donated it to the charity.

Thanks to all those that supported and donated.

If anyone wishes to donate go to the doddieaid.com and click on Glasgow Just Giving page and make your donation. Any help would be great or small donaton would be very much appreciated

Thanks again for all the support. 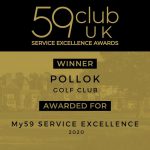 Copyright © 2021 Pollok Golf Club | All rights reserved.  | Privacy Policy
No reproduction, distribution or transmission of any information, part or parts of this website by any means whatsoever is permitted without the prior written permission of the Pollok Golf Club

Member Login
Welcome, (First Name)!
Enter Member Area
(Message automatically replaces this text)
OK
My Profile Log Out
We use cookies on our website to give you the most relevant experience by remembering your preferences and repeat visits. By clicking “Accept All”, you consent to the use of ALL the cookies. However, you may visit "Cookie Settings" to provide a controlled consent.
Cookie SettingsAccept All
Manage consent

This website uses cookies to improve your experience while you navigate through the website. Out of these, the cookies that are categorized as necessary are stored on your browser as they are essential for the working of basic functionalities of the website. We also use third-party cookies that help us analyze and understand how you use this website. These cookies will be stored in your browser only with your consent. You also have the option to opt-out of these cookies. But opting out of some of these cookies may affect your browsing experience.
Necessary Always Enabled
Necessary cookies are absolutely essential for the website to function properly. This category only includes cookies that ensures basic functionalities and security features of the website. These cookies do not store any personal information.
Non-necessary
Any cookies that may not be particularly necessary for the website to function and is used specifically to collect user personal data via analytics, ads, other embedded contents are termed as non-necessary cookies. It is mandatory to procure user consent prior to running these cookies on your website.
SAVE & ACCEPT